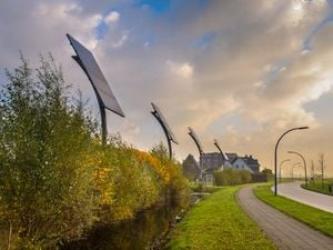 Northern Powergrid, the company responsible for the electricity network that powers everyday life for eight million customers across the North East, Yorkshire and northern Lincolnshire, has been shortlisted for the two national awards recognising its work to support community energy projects across the region.

The network operator has been nominated for the Community Energy Champion (Team) award at Community Energy England’s annual ceremony, which takes place at City Hall, London, this November. Utility Week meanwhile has shortlisted Northern Powergrid for its Community Investor Award, which will be announced in early December at Grosvenor House Hotel in London.

According to Community Energy England, the sector’s energy efficiency interventions are estimated to have reached 57,600 people / organisations and saved over £3.3m for UK households in 2021. Across Northern Powergrid's region, there has been a 130% increase in organisations involved in energy efficiency activities from 2019 to 2021, helping save an estimated £500,000 from people’s energy bills in 2021.

Anda Baumerte, who leads Northern Powergrid’s community energy engagement programme, said: “It’s fantastic to see our work recognised and valued by sector experts. Our vision is for a thriving community energy sector which is supported by strong networks, and we're proud to continue supporting community and climate action groups in our region. The role local groups play in delivering energy advice and powering towards a net zero energy system while supporting their local economies is vital in the context of the energy crisis.”

Northern Powergrid has been a long-standing advocate of community energy. Since 2014, when the network operator launched its community energy support programme, it has seen a marked increase in community groups interested in energy and emissions reduction projects, but a slow growth in new projects or initiatives. However, the tide is turning and thanks to funding initiatives like Northern Powergrid’s Community Partnering Fund and the Governments (now closed) Rural Community Energy Fund, access to funding has increased from just £8k in 2019 to £378k in 2021 supporting community energy schemes, including Circular Malton and Norton CIC, Humshaugh Net Zero, Hartlepower, Zero Carbon Yorkshire, and Monk Fryston and Hillam Community Association, and setting the groundwork for 45 planned community energy projects across the region in 2022.

Since publishing its Community Energy Engagement Strategy in 2020, Northern Powergrid has had more than 6,000 interactions with sector stakeholders, delivered 75% of its commitments, and held more than 20 community energy events. Over the past two years there has been a boom in local energy and climate action groups seeking to achieve net zero emissions on a local scale, with the number of organisations in Northern Powergrid’s operating area quadrupling. Groups or individuals interested in community energy can email communityenergy@northernpowergrid.com to sign up to newsletter updates or contact the network operator about their projects.

Building on this work, the network operator will be publishing a regional community energy research study, providing an in-depth analysis of the progress made by the community energy organisations in 2021 and the barriers they faced, and how the sector has changed since 2019. It has also launched its new Net Zero Community Energy Fund earlier this year to provide £50k to help groups access expertise, build their capacity, and provide start-up costs for new initiatives.