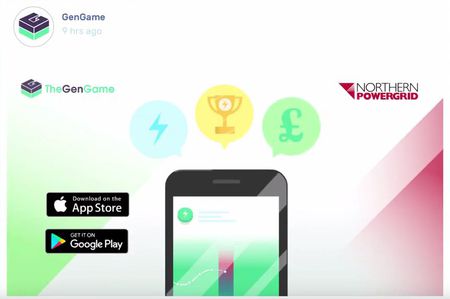 We've released details of our unique project which has found that mobile games could become an important tool for energy companies as they seek to manage power demand and keep costs down for customers.

More than 2,000 of our customers are competing for cash prizes by turning off their washing machines, televisions, lights and other home devices, in the first ever trial to show how a mobile game can incentivise households to reduce their consumption at times of high demand.

Network operators are increasingly looking for alternatives to costly upgrades by paying customers to reduce consumption at times of high demand. Many businesses receive payments for providing this Demand Side Response (DSR) but there have been few trials of residential DSR.

We collaborated with Newcastle University and gamification experts GenGame to develop the GenGame mobile game.

At periods of high demand players receive an alert saying “It’s GenGame time.” The more they reduce their consumption the more points they earn, increasing their chance to win cash prizes online.

Stephane Lee-Favier, CEO of GenGame, said: “Pausing your washing machine is only worth around 10p, which isn’t going to change customers’ behaviour. However, if you aggregate lots of small actions into one pot and create a £100 monthly prize it becomes much more interesting.”

With £350 of cash prizes available each month, players reduce their electricity consumption by an average 11%. Although the average is 305 Watts, some cut as much as 4.9kW, turning off appliances such as electric vehicles, caravans, hot tubs and tropical fish tank heaters for short periods of time. 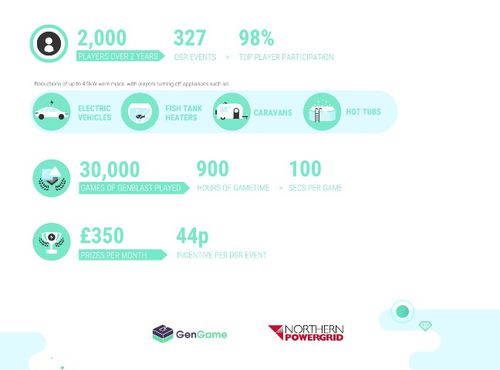 The three-year Activating Community Engagement project has generated valuable insights into how to incentivise consumer behaviour change at a time when energy companies are planning how best to manage demand from rapid take-up of electric vehicles. Average household daytime consumption is around 0.5kW but charging a typical electric vehicle can require 7-10kW,

Andrew Webster said: “If we see an increase in electric vehicles in one area we could just run a GenGame and reward people for charging their car when there is spare capacity on the network. As long as the incentive costs less than upgrading the local network, we have a winner.

“We are working with customers in the way they want and we now have more than 2,000 people signed up and active as flexibility providers. This is a much more dynamic approach for a more dynamic world. It creates a personal connection which we could also explore for other purposes such as fault reporting and energy saving advice.”

The GenGame app was designed by a team of experienced game designers and developers. Players were recruited via Facebook from across our customer base. They downloaded the free mobile game app and were sent self-install equipment, which enabled them to monitor their consumption in real-time on their mobile phone.

Developers tracked user behaviour and made around 20 updates to the app to optimise performance and improve engagement. Stephane Lee-Favier said that one challenge was how to keep people engaged when there were only two or three GenGames a week. “DSR happens infrequently, and you don’t do anything most of time. It’s a waiting game,” he said.

The solution was to develop a fun game called GenBlast, which people can play at any time to win “power-up” points. GenBlast gives players suggestions about how to reduce energy consumption and by keeping power low they can win more. Players can use the power-up points they win at GenBlast to improve their performance in GenGame, and by doing so earn more points to enter for prizes.

Developers also learned that by placing ads on Thursday and sending out equipment first class to arrive on Saturday, they could increase the number of people setting it up from 35% to 75%.

These and other improvements have cut the cost of recruiting customers by around 90% to a couple of pounds per person.

The lessons of GenGame are now being used in a follow-up GenDrive project which will explore how mobile games can incentivise electric car drivers to use their vehicles to support the UK energy grid.

Northern Powergrid, Newcastle University and GenGame are teaming up with green energy company Ecotricity and energy monitoring specialists EnAppSys in the £400,000 project, which is part of the Vehicle-to-Grid competition, funded by the Office for Low Emission Vehicles (OLEV) and the department for Business, Energy and Industrial Strategy (BEIS), in partnership with Innovate UK.

We and our partners held an event in Newcastle on  11 July to share information with industry stakeholders about the unique GenGame project. Feedback from the dissemination day will be incorporated into our final project reports which will be openly shared with the energy industry.