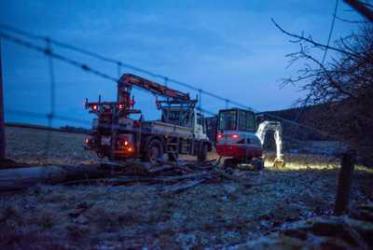 UPDATE: As at 11.30pm the number of customers still affected as a result of Storm Arwen has reduced further to 500.

Northern Powergrid is continuing its major restoration efforts after Storm Arwen devasted part of its electricity network, particularly in Northumberland and County Durham.

The electricity network operator is also tracking the weather closely and has taken action to ensure its teams are ready should Storm Barra affect its network and disrupt customers.

With a Met Office yellow weather warning across the whole of the UK for tomorrow (7 December), Northern Powergrid’s teams have remained focused on completing as much restoration work as possible today for those customers still affected by Storm Arwen.

Working in ongoing challenging conditions, its teams have now restored power to around 239,300 of the 240,000 customers affected by Storm Arwen.

With 700 customers still off supply as a result of the storm, Northern Powergrid’s teams will do all they can to reduce this number further and get the lights on for more customers tonight.

The forecast includes drifting snow in the Pennine regions of Northumberland, County Durham and Yorkshire and gusty winds across the whole of the North East and Yorkshire. This could impact Northern Powergrid’s network on higher ground and potentially disrupt customers, including those previously affected by Storm Arwen.

Unfortunately, Storm Barra’s arrival during the daytime tomorrow (Tuesday) could also impact the network operator’s work to rebuild overhead lines as it continues to get the remaining affected customers back on supply after Storm Arwen.  Its teams will continue to work wherever it is safe to do so.

The network operator has a fleet of 4x4 and, other specialist access equipment which it will use should windbourne debris, trees and other vegetation damage its overhead power lines and the weather makes travel and site access difficult.

The company’s website – northernpowergrid.com - will be available for customers to get updates and report their power cut and it has teams available 24/7 by calling 105.

Power cut tips and advice include:

Have you checked out our Help & Advice directory, it may just have the answers that you're looking for.